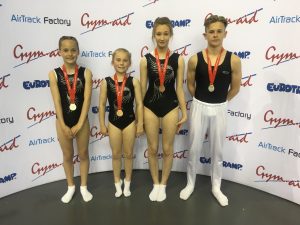 Some of our happy medallists

With 22 medals and 40 trampolinists qualified for NDP Finals, the East Region’s Trampoline Team won the trophy as the best of the 13 UK regions at last weekend’s Regional Team Finals in Birmingham.  This was a remarkable achievement and will hopefully be a springboard to still further successes.

Our DMT Team, who came 8th, won a further 4 medals and 4 more gymnasts qualified for the NDP Finals which will be held in Telford in early July.

On trampoline, golds were won by Connor Houston, Phoebe King, Hannah Hodgkinson, Gabriel Strydom-Green, Luke Dewe and Lucy Bevan.  Special mention must go to Lucy for her double gold as she also won on DMT and also to Charlotte Webb who won silver in each discipline.

Jack Wilkinson and Imogen Mayhew won silvers on DMT and across the two disciplines a further 25 gymnasts achieved top 8 placings securing points for the trophy.

Altogether 44 of the Team’s trampoline & DMT competitors qualified for July’s NDP Finals where they will be joined by several of the East’s best trampoline and DMT gymnasts who qualified from the level 8 events held earlier this year.  We wish them all every success.

Huge thanks are due to the East Team’s coaches, judges and supporters who worked and cheered so hard all weekend.  Thanks too to all the coaches back at our gymnasts’ clubs and to the Regional Squad coaches, Jack Kelly and Paul Kitchen.

Detailed results can be found on the BGscores App which can be downloaded from the AppStore for all Apple devices, and from Google Play for all Androids.