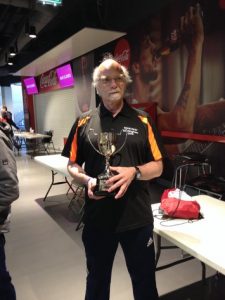 First in Trampoline, Third in DMT

​Team East travelled to Birmingham over the weekend for the Regional Team Finals. The 96 Trampoline & DMT Gymnasts had qualified through the recent Regional Compulsory Finals and were hopeful of a good result.  Accompanying them were a team of coaches drawn from clubs and chaperones all of whom were volunteering their time to support this venture.

Our DMT and Trampoline sections each won 17 medals and many more achieved top 8 placings; East Region will be well-represented at the NDP Finals in July. Skip to the bottom for results.

On trampoline there were golds for Jack Marin, Jak Bogue, James Warren and Eve Spencer (who was particularly neat).  Maisie Waller and Olly Cawdron achieved silvers; Lewis Cromack, Hari Henderson and Jack Kelly were on the podium for bronze.  Within the Disability section, Jane Wilkey and Ethan Corkin were both winners and Alex Radford was awarded a bronze.

It had been quite a day and we were a bit nervous about maintaining our positions as we had fewer gymnasts competing on the following day.

Sunday morning was indeed rather quiet for us on trampoline with not a single medal won. We did have some useful point scoring though in 4th to 8th positions.    On DMT we had Nathan Armstrong on the podium for his silver and Heather Mann for her bronze.  Those point-scoring positions in both disciplines proved vital however and at lunch we remained third on DMT and were still leading on trampoline.

Early in the afternoon, East Midlands sprang a 14 point swing from us on trampoline despite Stanley Deacon’s silver; the strong South West team were drawing ever closer.  We had more of a gap behind us to 4th on DMT but it was going to be rather nail-biting during those two final flights.

Shannon Waterman and Eve Hood finished their routines lying first and third respectively but with a whole flight of their event remaining.  Trampoline warmups for our final competitors went well but in gymnastics, disaster can be very close.  At Saturday’s Orientation Jaime Alvarez came clear off the trampoline and flattened his team coach Jane Hawgood!

Paul Kitchen and I watched Jaime’s first competition routine from the other end of the hall.  Watching end on you see many errors that judges don’t always pick up so we were very impressed with what appeared a very sound first routine.  The judges were very effusive too awarding Jaime almost unheard of 9.5s for neatness.  His second routine started equally well but our hearts skipped a beat as his full twisting back, the move that caused the previous evening’s fall, clearly cast sideways.  However, Jaime recovered well and finished in style to win handsomely.  Teammate Max Gaeta picked up valuable points in 5th behind Jaime.

We watched the BGscore app avidly to see how things looked for Shannon and Eve; we were delighted when it revealed that no one had been able to displace them.  Meanwhile, Chloe Caley quietly produced two very sound routines in her NDP 6 event to gain another bronze while, on DMT, Ceri Ewing had a tremendous competition to win her event and Cody Gaeta got a third medal for his family, this time bronze.

After Saturday’s 25 medals did our 9 on the second day perhaps hide successes we were having in minor placings or suggest we would slip from our overnight positions?  Everyone was too busy competing or coaching to keep a tally and the announcers were very coy about it.  So it was with great joy that we learned we were third on DMT and had won the trampoline team event for the second time in 4 years.  Brilliant!.  East Region’s Tumblers had a near-placing in 4th whilst our Disabilities Trampolinists achieved 6th.

East Region’s clubs and coaches have much to be proud of; they will be delighted to have so many of their young people at next month’s NDP Finals.  I would just like to take a moment to thank the very hard-working, incredibly supportive East Coaching Team and Chaperones.  It was a pleasure working with you and our gymnasts.  Thank you coaches Adele, Claire, Jane, Amanda, Helen, Nicki, Garry, Gary, Paul, CJ and Phil and thank you chaperones Emma and Helen who walked many miles and were so supportive of nervous and emotional gymnasts.  Stars all of you! Individual detailed results can be found on the BG Website, the team results & individual pacings can be viewed as PDF files below: